The bust of a World War II veteran and a former governor of the former Kalinga – Apayao was unveiled during the province’s 27th commemoration of the separation of Kalinga from Apayao on Monday, February 14 at the Kalinga Provincial Police Office headquarters at Camp Duyan.

Duyan distinguished himself when he led F and K companies of the 11th Infantry Division of United States Army in the “Battle of Toul Pocket in Bataan. Trapped with no food, few ammunitions and with no entrenching tools, they dug foxholes with bayonets and sharpened bamboos and later launched a series of counterattacks to beat their enemies.

For his gallantry, Duyan received the Silver Star, the Purple Heart Military Medal for the US Army as well as the Gold Cross Medal from the Philippine Army. He also survived the Bataan Death March.

While at the Capas Concentration Camp, Duyan was able to escape and organized the Luzon Guerillas and affiliated it with the US Armed Forces in the Philippines – Northern Luzon Unit where he was assigned as the Commanding Officer of the K and 3rd Battalion, 11th Infantry Division. Said divisions fought the Hukbalahap insurgents in Central Luzon.

He later served as the first congressman of then Kalinga-Apayao (1966-1967) and then became the first elected Governor of Kalinga-Apayao in 1968 after the old Mountain Province was subdivided into four political units.

Duyan was awarded the Congressional Gold Medal for Filipino World War II Veterans in the US In October 19, 2019.

The headquarters of the KPPO was named after Duyan as a tribute.

During his term as governor, Duyan pushed for massive road program of the province, initiated the subdivision of the 136 hectares lot owned by the provincial government which he apportioned to the different government agencies of Kalinga including the KPPO.

PrevPreviousSome 21 athletes, two politicians and two artists are named the first batch of MSD Bests for 2021 on February 22 at the Baguio athletic bowl
NextDanglas schools start use of mother tongue as mode of teachingNext

Stand in Solidarity for Peaceful Philippines 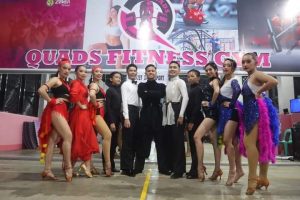 LA TRINIDAD, Benguet – Another Highland Boxing Promotion has gone to the land where the biggest diamond was found hoping this time to see action when the other was “left

He was only 13 when he first held a guitar of his own. It was a gift from his mom, and later on, his voice became a gift to everyone

Muay Thai athlete Lee Ariel Lampacan may just have what it takes to win a PhP5.6 million multi-fight contract with the biggest mixed martial arts stage. Lampacan is one of

Winners of the first Patawid: Art in the Park with Baguio’s Finest Young Artists were presented last Sunday at the Botanical Park during the awards ceremony even as the officers

Jean Claude Saclag, who was one of the top prospects to replace Mark Sangiao and Eduard Folayang in wushu sanda, is back in the sport he excelled in before joining

A connection from music to soul

Our love for someone or something is a divine feeling that makes our heartbeat pound and yet we feel safe and sound. The moment we fall in love, everything stops